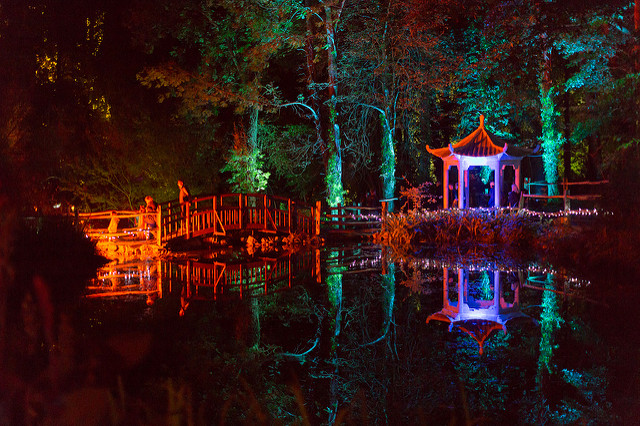 It was a cold clear night last week when we arrived at Robin Hill for their February half term Chinese New Year celebrations.

I’ve been meaning to go for years but up until now, the two Little Boys have been too young, and the weather too worrisome. This year I was determined and we set off with much excitement and hats rammed on heads.

We’re frequent visitors to Robin Hill throughout the year. There really is nothing better for the LB’s than letting them loose for hours on end playing tug of war, exploring the miniature village, the African village and staring agog at the carp as their cavernous mouths clamour for food (I speak of the fish, not the LBs). But this familiarity didn’t prepare us for just how pretty the park would look under cover of darkness.

A handy entertainment programme given to us at reception told us that we had around 45 minutes to wait for the main event – the dragon procession followed by the Chinese lion dance. Red lanterns cast a rosy glow as we strolled towards the maze…an attraction not to be missed and thankfully open! We wondered just how much of the park would be open, and the answer is a good part of it. The maze, the upper wooden playground, the canopy skywalk, water display and an expansive illuminated route were open to the public, pleasing children and adults alike.

Being up after bedtime, and in the black of night to boot, the LB’s were thrilled at the colours surrounding them. Around every twisty turn an illuminated surprise awaited, the Chinese dragon was beautifully displayed and we were staring and taking pictures when the flame projector shot into the sky (LB: ‘was that the space station mummy? Mum: Eerrrrr no…’). Stomachs began to grumble shortly afterwards and we headed to the woodland wok area. Crowds of people were enjoying what surely has to be the best outdoor Chinese food experience on the Island, if the smell was anything to go by. Sadly I didn’t get to sample any as the queues were just too long, settling for a very good and piping hot chocolate instead. And giving in to pleas for candy floss for the LB’s.

As the crowd began to move towards the back of the amphitheatre we tagged along and waited for the dragon procession to begin. The banging of a gong announced the arrival of the dragon who I have to say was very well behaved, preening for the cameras and not nibbling any of the many hands outstretched to pat him! The procession moved off to the rhythm of the gong (banged loudly and joyfully by the smallest LB much to his delight) and headed up and around the canopy skywalk. There was definitely a feeling of ‘good will to all men’ from the crowd, could have been the warmth of the food just scoffed or the lights shining on the upturned faces of the excited children. It certainly made for an enjoyable half hour stroll.

Back to the amphitheatre and we took our seats on the wooden benches (at the front, best seats in the house according to the LBs) awaiting the arrival of the dancing lions. There was some fidgeting, racing around the arena, and falling off of the benches (have I mentioned I have two boys?), before the dancing began. And it was BRILLIANT! For a full 20 minutes three ‘lions’ leaped and twirled before us. Poking their noses into the crowd and making the children laugh. The choreography was great as was the choice of music. After all, who doesn’t want to watch 3 illuminated lions get their groove on to the Gorillaz ‘Dirty Harry’!!! I defy anyone watching that not to start bobbing up and down to the beat.

All too soon the lions clambered back on stage to their starting positions and took a well-earned rest as the curtains came down to rapturous applause. The lion(s) will certainly sleep tonight to coin a ‘Tight Fit’ phrase. And speaking of sleep, it was at that point that the candy-floss-sugar-induced-high dissipated and the LB’s gave a collective yawn. Hats were rescued from the floor, and mittens pulled on, before the uphill walk to the car park began. The soft light of the red lanterns guided our way as we bid a fond farewell to Robin Hill.

Electric Woods, for one night only you rocked our world!

For more information on visiting Robin Hill on your cottage holiday on the Isle of Wight, click here