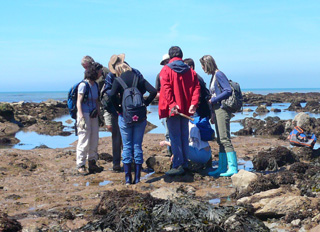 According to a new Dinosaur Map of Britain compiled by Dr Paul Barrett, Merit Researcher from The Natural History Museum, the Isle of Wight has just been declared the UK’s Jurassic Capital

Obviously, as Islanders, we already knew this, as can be seen by some of the great Dinosaur attractions we already have on the island.

One of these, and an authority on the great beasts that roamed our small island millions of years ago is Dinosaur Isle. What is great, is that they even have monthly Fossil & Geology walks, Exhibitions & other events, so whenever you want to visit, there is an event for you.

With many of our properties located on the East coast of the Island we are perfectly placed to provide you with a base for your fossil hunting trip. Whitecliff Bay is described as “a geologists heaven”, other key areas on the Island can be found on the UKfossils website.

Take a look at our Isle of Wight cottages for your next fossil hunting trip but do make sure you stay safe. Cliffs can be unstable so if you're searching for fossils, chip away at rocks that have already fallen onto the beach and stay away from the bottom of cliffs.